“Life happens for me!”

We don’t have enough control in this world that we MAKE life happen and I prefer to not be a bystander who life happens TO. Life happens FOR me! This was an insightful piece I picked up at Steph’s Women’s Strength Summit.

The past few years have been tough, yet somehow I’m still #WinningAtLife

After having Garner (now three), my plate was very full! I was co-running the bike shop and raising the boys. As if things weren’t busy enough, I then got back into my own career doing marketing for bike shops. Bike riding was somehow knocked way down the list of priorities. Since having kids, I was feeling like I had lost myself in the vein of being a good parent and just being part of the hustle. I wouldn’t do it differently. However, after taking stock of my own life and my own happiness, I decided that getting back on my bike was what I needed to add to the mix. Last Fall I put together a list of Enduro races for the year, knowing that it was like a dream sheet and would be a LOT more riding than I’d done with any consistency since Zander’s birth (now seven!) Plus, enduros are a new thing for me, so new challenges.

I’ve hit some of the Enduros on my list and I’ve missed others. A few months ago, I entered a contest by Liv Bikes, the Liv-for-a-day Contest. The contest was for women who were just starting out and asked them why they deserved to Liv for a day. Although I am not a beginner, I am going through a new beginning of getting back on my bike after having kids and dealing with life. This is a struggle that I see many people go through as they try to be the best parents they can or the best they can at their jobs – work/bike/life balance.

Liv, as a company for women, saw the value in my story of a new beginning as something many women could relate to.  I also had a lot of good friends vote for me. I won and was awarded an entry into the Sturdy Dirty Enduro in Seattle – the first race in a series of women’s only enduros. I now had a new goal – get ready for this very competitive event with nearly 250 women… and get there.

As part of the contest I also received a weekend with the Queens of Dirt at their MTB clinic in Bellingham Washington the weekend before the race. I also got a fitting on a demo Liv Hail to be able to use for the two events, along with a new MTB kit.

The trip up north with the boys was an epic and memorable one. We hit pump tracks wherever we could along the way and also made good use of the pools at the hotels. We ate pasta in San Francisco, Sushi in Ashland and Pizza in Bellingham. We dipped our toes in and threw rocks into so many rivers, I can’t count. My SoCal boys saw more water than they’ve ever seen in their lives.

The boys tagged along at the Queens of Dirt clinic and even hit some of the little obstacles and Zander learned how to get his front wheel up in the air – he calls it a bunnyhop! 😉 I met many strong and inspirational women at the clinic, from the coaches to the other attendees who were overcoming obstacles in their lives or just getting to be better riders. The scene was one filled with love and support and we all had a great time!

Throughout the trip, as I saw the boys hitting pump tracks and Zander at the clinic getting his front wheel up, I really saw the value this adventure was bringing them. Zander was bonding with his bike more than he ever has.

We got to Seattle where we spent the week at a friends’ house – I’m so grateful for Chris and his fam for putting us up while they were away. (More on Chris later, I’m sure as he’s got some rad bike stuff in the works!) Not just anyone would let you stay in their farmhouse for a week when they’re away. I just love how things come together like this to make our adventures possible. 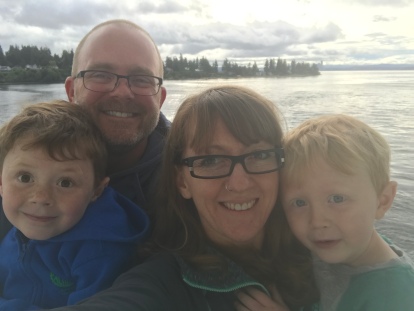 For the Sturdy Dirty weekend Craig flew up to help with the kids, so I was able to join the pre-ride day on Friday with Liv athletes and ambassadors. He took the kids out for the day so the only worries I’d have were big jumps, drops and tech! The Sturdy Bitches believe in making an event accessible to all women – providing an atmosphere where women feel safe to try it out. This is why the pre-ride was so important. Many Enduros don’t even release course info until right before an event, but the Sturdy Dirty races want to give women the tools to start racing this format – I LOVE IT!

I rode the Liv Hail and was truly surprised at how well it performed for me to on sight some very technical trails. This 160mm carbon whip was built for racing through the tight trees and taking the edge off of one rock and root after another – a very stable, yet quick-enough handling bike! It was so much fun shredding with all the ladies from Liv, Roam Events and the Sturdy Bitches. They have a really a powerful group of women that put a ton of work into making this a great experience. The venue at Tiger mountain had rain on Friday and more roots than anywhere I’ve ever ridden. Some of the trails dried out but my biggest challenge would be slick roots covered with some nasty mud after so many riders going through. Somehow with the pre-ride, I didn’t get to ride the biggest waterfall of the race. I scoped out Predator before the race on Saturday and decided I shouldn’t on sight it race day. You’ll see some great pics of the course here on pinkbike but here is one of Predator (not me – I didn’t have the ovaries for it!)

So, I downgraded to sport to avoid that stage, but felt great about it. This race would give me plenty of competition with 250 women on a very technical course – I was happy about avoiding the pro/expert stage with Predator. I placed 13th in sport, but more importantly, I rode some rad trail! I mean, I SHRED some rad trail with a great group of women! I rode “The Vag” (pic below) during the race, that I had unlocked on the pre-ride thanks to the encouragement of the Liv ladies. You get a sense of their encouragement & support in the video.

The after-party/expo brought together many great brands and companies that support women. We were joined by Liv, Bell Helmets, Shimano, Industry Nine, Dharco AND dance parties, costumes, IPA and a raffle! It doesn’t get much better. My time at Sturdy Dirty was a huge success. #winningatlife